This is one of my favorite TED talks. In fact, I will go so far as put it as my favorite. 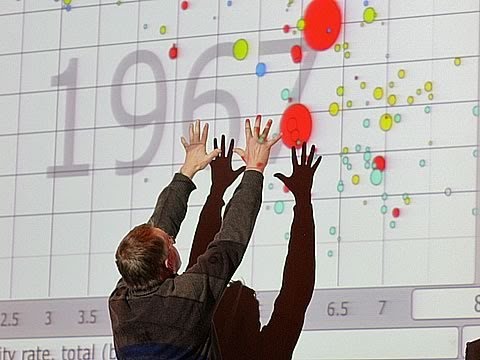 It is Hans Rosling, a Swedish physician and statistician. This talk, as well as the work of his Gapminder Foundation, are here to show us that our mental model of the world has not changed in the last half-century, and that things are substantially better the world over than we believe. He graphs the countries of the world, placing them on a graph comparing life expectancy (health) and per-capita income (wealth), over time.

I’ve been reading the ePub for his book, Factfulness (available on archive.org) lately, and the I’m all-in with the idea.

Emotionally, I have to say, I’m not feeling it.

William Gibson said, as I continue to quote, “The Future is already here — It’s just not very evenly distributed” There are various reasons why the Future isn’t evenly distributed, but there being people trying to fight the Future. But you can’t fight the Future; it’s like punching a breeze. You can fight people, though. And if you get the guns and qualified immunity, you can gas and taze people, shoot them in the face with rubber bullets. You can fire a “warning shot” that all your cohort assume is a shot at them, so you can shoot at unarmed civilians. And, of course, you can kneel on a person’s neck until that person dies.

I believe that some are doing what they’re doing because they believe they’re extending the head start that we got because we were the only industrial nation left unbombed in WWII, but I believe they’re squandering it and the benefits that could arise as the rest of the world gets richer and healthier.

And of course, there are those who will believe what they must and do what they must, as long as it allows them to wallow in cruelty.

A friend talks of “the beautiful, horrible Future that will kill us all.” I believe there will be problems, but I don’t believe that. I know the trends, both those mentioned above and many others that relate to the kind of things computer professionals like me value, are trending in good ways.