William Gibson, one of my favorite science fiction authors, has this line he’s been repeating.

My context for this thought was Gibson’s work: Cyberpunk, with it’s high-tech lowlife and “the street finds it’s own uses for things”, and how the coolest, sleekest, most dangerous things the characters used or wanted being made by companies like Ono-Sendai and coming from Japan. The Future is expensive, and not made around here.

That’s a thing, but that’s not the only thing.

For example, here’s a covered bridge. 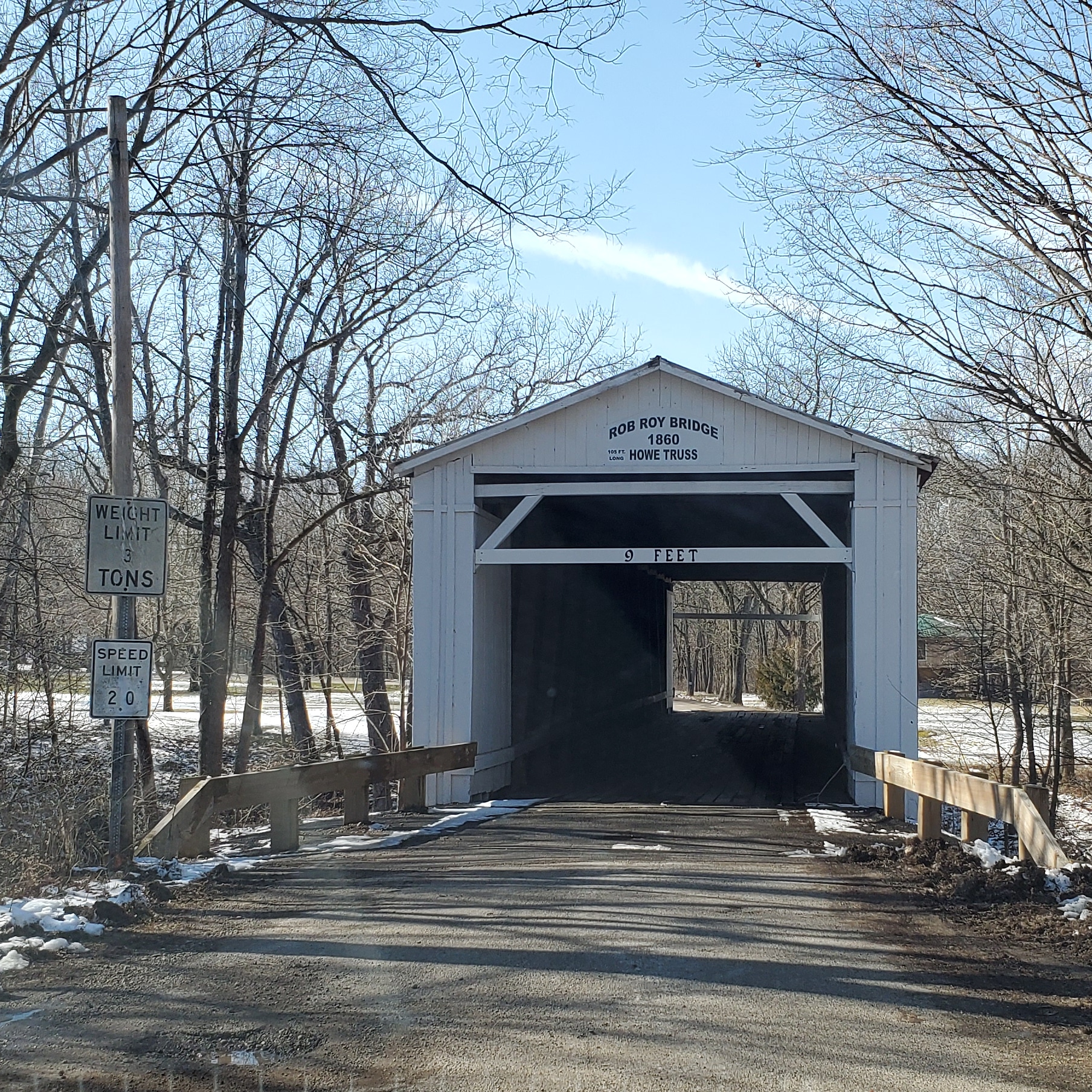 This is the Rob Roy Covered Bridge, just south of Attica, Indiana.

Today, most of the bridges I drive over are steel-reinforced concrete. I believe that this became a common, if not the most common, way of building bridges for cars around the 1950s, especially if it’s a bridge with shorter span, like this bridge crossing the Big Shawnee Creek.

You made bridges out of wood.

And when you leave wood out in the elements, like you have to when it’s a bridge, it tends to get wet, which leads to rotting and falling apart. But there’s a way around that; put a roof on it, like with a house or barn.

And there’s interest in them. There’s lists on Wikipedia and other places on the Internet.

For me, it was really “There are pockets of the 1860 that are just a 40-minute drive away” that drove my curiosity to take that above picture, and many of the roads I took to the bridge were originally surveyed and paved in 1920.

The Future is not Evenly Distributed, in part, because the Past got there first, and there are many things that fall out from that.

For example, let’s take the Internet. Specifically, the part of the Internet that comes to your home. It would be best to have a good solid link to the world, maybe something like fiber-optic. But most houses don’t have fiber-optic lines to them, but rather two copper lines: telephone and cable. Municipalities are loathe to allow widespread digs to run fiber to most neighborhoods, because that means chaos and damage and backhoes and the possibilities of cutting something important people don’t want cut, and so it’s just easier to use the old lines.

This is a different case; I think the number of people who have nostalgic or archival feelings for the telephone and cable companies are very small. But those lines already exist, so we use them. And because we use them, we make due, we don’t move forward.

This may not be directly on-topic

Kari Paul is a technology reporter for the Guardian, who rented a car from GIG Car Share, which uses a cellular connection to control and monitor the fleet, and took it into rural California, where cellular service was spotty. Spotty enough that the car couldn’t phone home, so it just stopped and wouldn’t start.

It did keep track of start attempts, and there’s a limit to the number of times you can start a GIG car, so when she towed the car to a place with service, without help from GIG, it indicated that she might not be able to start it again if she turns it off.

There’s also books you purchased disappearing from your device. Even more ironic when it’s 1984 that’s deleted.

And, of course, the increasing death toll from autonomous vehicles. (I really think I’ll have to keep an eye on that one.)

In the movie version of I, Robot, Will Smith preferred driving himself, because he knew from experience that, even when not controlled by an evil hive-mind, robots didn’t necessarily have the correct priorities and were thus dangerous. (He preferred Converse Chuck Taylor high-tops because of product placement.)

It’s up to people like me, who build the things that make up our Future, to make it so that the failure modes don’t inconvenience people, much less incapacitate or kill them. Lesley Carhart, has developed a wonderful term – Valley Pattern Blindness, or VPB – to indicate when Tech fails to do so, and fails to do so because they can’t even imagine the case that fails.

Hacks4pancakes then brings up the Lyft/Uber lines at Midway and other airports that force the users to stand outside in an Illinois winter when a selling point of ride services is that you can stay inside where it’s warm until your ride’s here, but here I can’t help to think that it is institutionally preferable to the airports, despite the inconvenience for flyers, and it’s a point where Valley sees it as better to play along.

So, the trick is to incentivize Tech to fight for the users, like Tron, and to avoid distributing a Future that isn’t right, however you count it.

This makes me want to quote my friend, Patrick.

(T)his beautiful terrifying future is going to kill us all.