I found this in my Twitter feed, which I found interesting, because I normally see things of this form on Facebook. 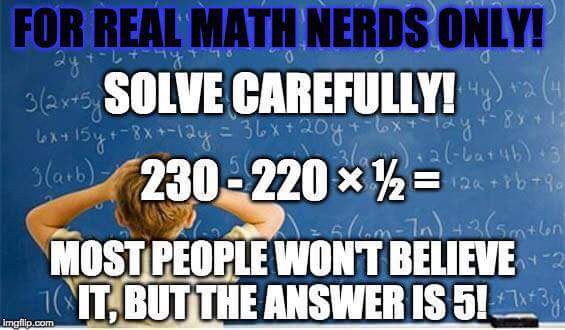 The order of operations is wrong.

But notice the punctuation.

This is a mathematical pun, relying on common mistakes, unfamiliar notation and Facebook meme convention disguise a correct answer as wrong.

And because this makes the user feel like Clumsy Pan Guy, I feel I must don an obnoxious sweater and say…

There has to be another way!

There was a logician from Poland named Jan Łukasiewicz, who came up with this notation + 1 2 instead of 1 + 2. Because of his nationality, it is called Polish Notation. (Not because, as I thought as a CS underground, of an obscure Polish joke I had never heard the setup to.)

Friedrich L. Bauer and Edsger W. Dijkstra re-invented this in the early days of computing, writing 1 2 + and calling it Reverse Polish Notation, and it became popular among people who liked it in HP scientific calculators. It is cool because it maps to a tree, and because it works well with a stack.

If we lived in the world of Reverse Polish Notation, we would never have to worry about PEMDAS again. The need for parens would go away, because left-to-right number number operator would be the only way to math.

But, true or nay, there would be great uproar over introducing such a thing. I’m here advocating for it, and I don’t know that I have used it in anger even once.

You can go deeper. With anything math-related, there’s always deeper. Mark-Jason Dominus gives a very good deep-dive on Precedence. As a good shorthand, if you’re writing and you aren’t sure what it should be, add parens until there can only be one choice.