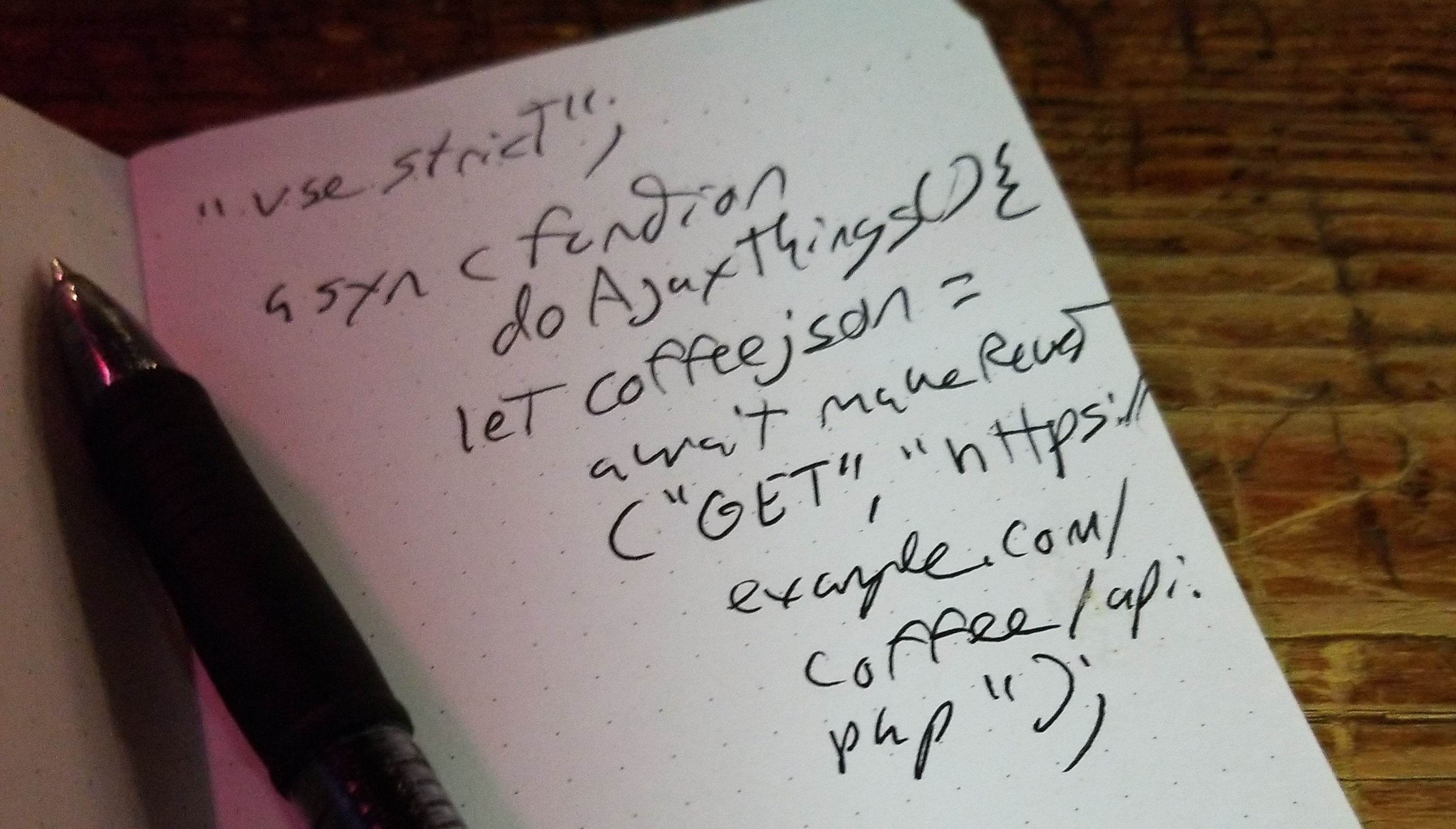 I do Javascript as part of a raft of technologies I must use to get a number of tasks done, but most of where I use it, it could be turned off without the tools working.

Well, many, at least.

This leads me to be trailing-edge for a great number of JS styles and techniques.

So, I’ve been trying to pick up async/await.

Javascript is fundamentally asynchronous, so if there are three tasks — a, b, and c — and task b takes a long time, task c will jump ahead and finish first. This is a problem if task c relies on task b.

Async/Await is the newest method to put order onto a language that will route around it. First was Callbacks, which lead to “Callback Hell”.

(Yes, a demonstration would be good here, but I’m not here to talk about Callback Hell, and none of my tools have grown in such a way that this is their major malfunction. Yeah, there has been bad, but not this sort of bad.)

Following this was Promises. Metaphor Time: I ask for $20, saying I will pay you back. It will take time for me to get paid, hit the ATM, etc. There are two options: I will pay you back and you can use that money to buy lunch, or I’m a deadbeat and you drop me from your friend’s list.

There are three parts of the Promise, as shown above:

I’ve touched Promises, in JS and in Perl. The problem is that, in Perl, we know that tasks started as a, b, and c will end a, b, and c. The problem can be that we’re perfectly able to run c while b is blocking and it won’t. Perl Promises can help with that, but that isn’t the topic today.

Today’s Topic: Async/Await and Javascript as She is Wrote

Different story here. It isn’t about me being a deadbeat. It’s about me being a Coffee Achiever. I cribbed a lot from Stack Overflow, especially this answer on using async with AJAX, which is exactly how I will use it and not often in the example code. I will break it into pieces and explain it as I understand it.

This hits another long-lasting issue with JS: when do you run it? In the 90s, it was common to see the <script src="my_lib.js"> in the <head> with the <link rel="stylesheet" href="style.css">, but the problem was that the Javascript would trigger before the page was done loading, so it then became common to see it next to the ‘</body>’. The was “good enough” then, but we’ve become more insistent. In jQuery, the convention is

But I’m going vanilla in this post, and here, there’s an event triggered when all is ready, and that’s when the DOM content is loaded. So, "DOMContentLoaded", of course.

And lots of conventions in this. First of all, HTTPS Everywhere still has work to do, and so there are pages that are served without encryption. Within a page, if there is a part where anything is unencrypted, that is a point where bad stuff can get in, and there will be a problem. But, many times, the site is served in both https and http from the same document root, and the browsers allow //example.com to use the http(s) of the page as is. A clever thing that you might not have seen if you don’t do web.

In this case, the coffee api returns JSON that looks like this:

My main remaining Quantified Self behavior. I mean, I still wear a FitBit, but…

It seems that the templating engine of choice for Javascript is now Handlebars.js, which was inspired by Mustache. This is because for both, if you wanted to put header in <h1> tags, the template would be <h1></h1>, and the curly braces look a lot like handlebar mustaches.

Our template puts the responses in <div> tags.

It seems like a good idea to put the moving parts in another function, but I haven’t yet. I think the “feed the day’s information into the function, get out HTML, add HTML to an element’s innerHTML” is fairly obvious. I could really imagine adding a setInterval to clear and rewrite the week’s count.

There’s a cheat here; you could easily put the template in the page instead of an external file. Depending on how much you change things, this could be perfectly acceptable:

But then, there would be little enough going on here that we wouldn’t need the Async. I can see the wonder being when you have a number of elements trying to work independently, and when these things build on each other. For example, in that above example, I might want coffeejson to update once every few minutes, but template might might change rarely once you have developed it. 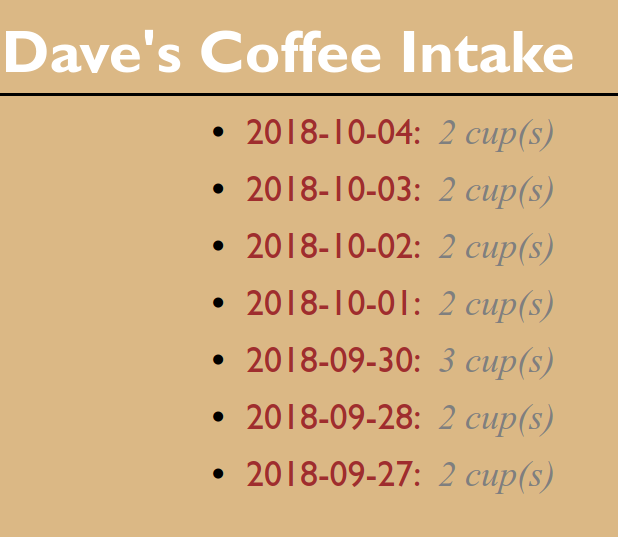