There was a time when I didn’t spend all my writing time pushing Perl and solving problems. My first pass through higher education was in Journalism and Mass Communication, and I was required to do an internship.

Computer people would be interested in understanding that in other fields, at least at that time, the average internship for Journalism students was not paid. My j-school insisted that we do a paid internship, to insure that we did something and didn’t just make copies and get coffee.

I found an internship through networking with an environmental non-profit with an office on Capital Hill, very centrally located in the middle of the DC action. I attended House committee meetings, monitored Senate floor debate from both in the gallery and an allied senator’s lobby, collected printed Supreme Court decisions near the side-door of the building, talked my way into getting a Department of the Interior phone directory, went to meetings in big offices on K Street, got a library card for the Library of Congress, and basically got as much of the whole DC experience as I could.

I feel that this is a time to point out that this was about a decade before the events of 9/11, not now, which is about 20 years after those events. I am positive that the security posture has changed drastically.

I mentioned a committee hearing. Seats in committee meetings are first-come, first-serve, and there are very powerful people who want to have those good seats, but don’t necessarily want to show up early or wait around for hours. I believe that those who took on that task were otherwise bike messengers and the like. The attendees must be able to enter to do so, and so anyone, as long as you could get through the metal detector, you could get in.

My senator was high in Hart, while the powerful senators generally are in Dirksen, and when I went to see the front door of my senator’s office, it was above where Alexander Calder’s Mountains and Clouds. The interesting thing about this, to me, was that, being hung from the ceiling, it was difficult to clean, and the top was covered with dust bunnies and paper airplanes. 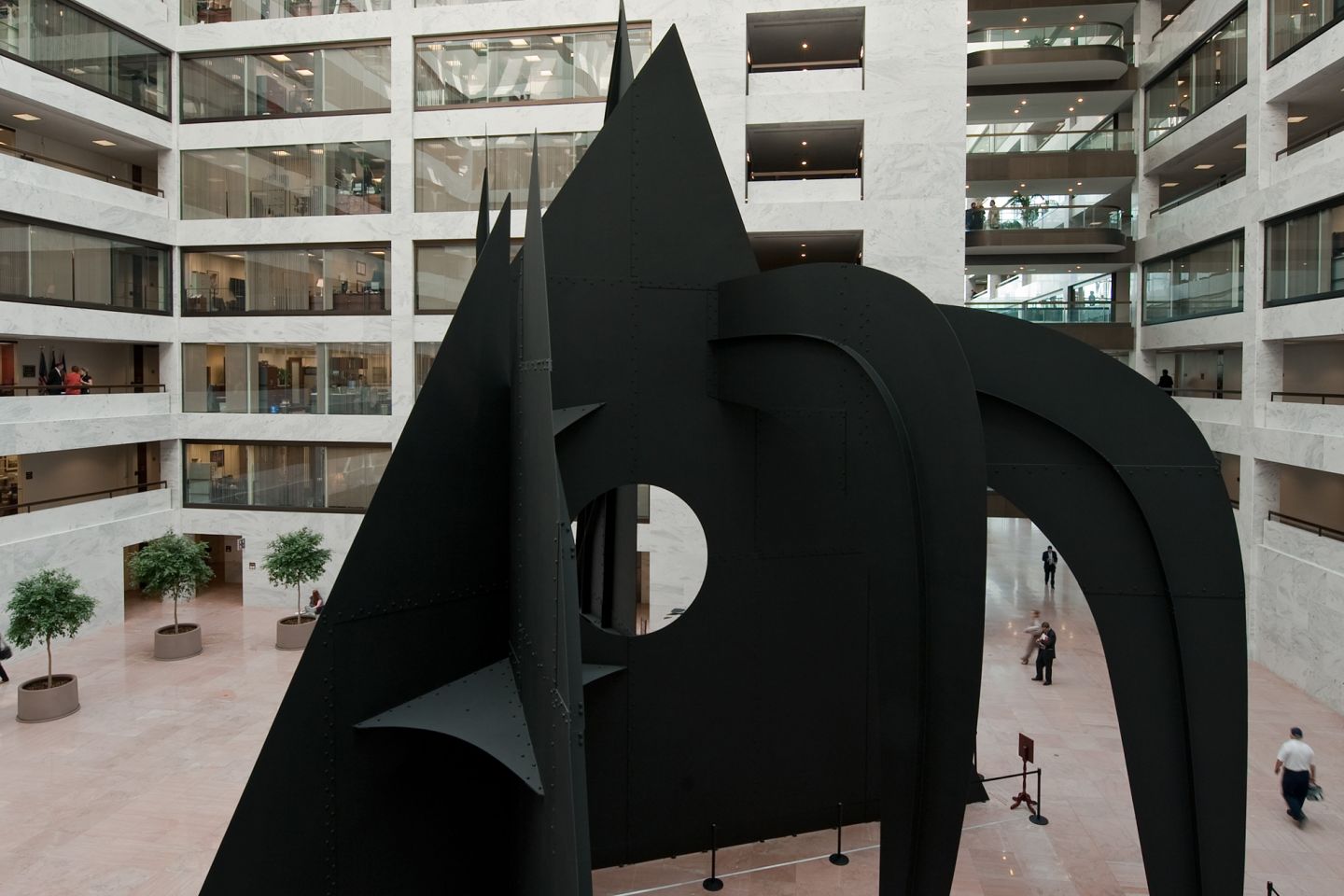 We (my fellow interns and I) visited and (IIRC) shared an elevator with some people who wished to visit their senator. For some, it’s merely a picture with the elected official, but sometimes flags that have flown above the Capitol building are given out. (They raised flags several times a day to keep the supply up.) To put a name on it, Constituent Services. We definitely first think of the wealthiest as being first in line for this, but a congressperson helping a constituent when government doesn’t work right is definitely good press.

This level of security was even less strict than that of the Smithsonian, the museum complex down the Mall from Capitol Hill. After a person threatened to blow up the Washington Monument in the 1980s, they searched bags and closed the parking garage in the basement of the Air and Space Museum. As a whole, besides the metal check, I would say that getting in and out of these buildings would be easier than most office buildings I’ve been in.

I have no doubt that things were much tighter after 9/11, and would guess there’s some mechanism by which you contact a representative’s office with your business, and only then can you go in. But (until fairly recently) the open and touristy aspects of Capitol Hill were still a thing.

Things will be different next week, I’m sure. But fundamentally, our elected officials work for us, and thus need to be able to interact with us. I’m shocked that the barricades were so easily bypassed by the mob yesterday, but to believe that these buildings are, or were ever meant to be, locked up as tight as Fort Knox or Area 51, is to belive something that was never true.