One of the brighter parts of my week occurs Friday morning, following an automated tweet. It isn’t that tweet that’s the bright part; it’s the response.

When it started, I was starting to play with the Twitter API, mostly for sending tweets, but eventually I wanted to be able to look up what I had tweeted earlier, and I wanted excuses to expand my knowledge of SQL. So, I wrote something that’ll collect all my tweets and stick ‘em in a database. It’s tables that would be offensive to our Codd, sure, but they’re there.

Eventually, I started wanting to be able to bookmark tweets, because someone would say something about some topic or other, or link to a blogpost explaining how do do something, and I would want to get back to it later. And, eventually, I realized I had the tools to do exactly that, and I overloaded meaning for the “like” button to add “I want to be able to look this up later” to “I want the user to know I read and appreciated something”.

At this moment, I have 89,137 stored favorites, and I’ve built and abandoned several tools to allow me to look up, for example, all the times I liked Brendan Eich talking about Javascript. (Which is 12.)

And I started thinking about #FollowFriday, where you pick out accounts that you like and think others should look into. I decided that it’d be hard to do it repeatedly, without favoritism or boredom. But, I thought, I should have the numbers. How about SELECT COUNT(*) c , username u FROM twitter_favorites WHERE DATEDIFF( NOW() , created ) < 8 GROUP BY u ORDER BY c, and just cutting it off before 140 characters? That’d be easy. 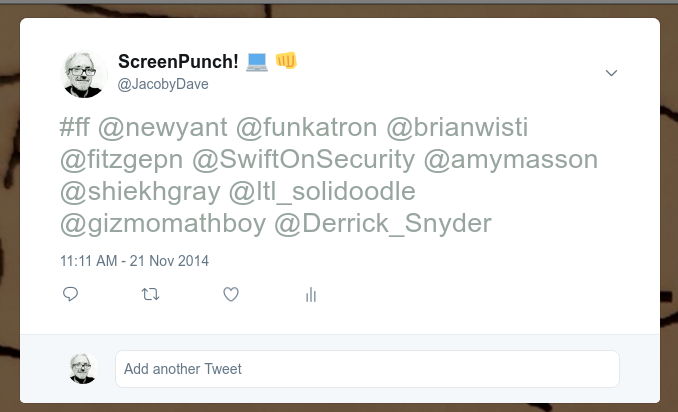 It didn’t take off immediately. But eventually it id.

It became a challenge among friends – mostly but not exclusively those who I knew personally before Twitter – to get a top position on my #ff email.

And now, starting 8am Eastern, a heavily GIFy stream of tweets gloating about their position or complaining about their demotion occur. It isn’t for everyone, but I think it’s terribly funny.

It is entirely my likes, stored in my database, so I choose who are my top, but I don’t. I don’t intentionally think I want my friend Patrick to make the top. This means there are times when someone I don’t otherwise know show up high on my list.

My interests are wildly diverse, and therefore there’s changes week-to-week, but mostly it’s a number of people who I know and like. My friends.

I don’t think I have the source code online, but it is, I promise you, about the easiest think you could think of writing to do these tasks. The cool part is that other people participate as well.