It started with a post on Practical Developer about finding your new favorite song with Spotify. “I should try that”, I thought.

The comments mentioned Last.FM, a service which tracks your music for you. Eric mentioned a playlist of 45 tracks that are his favorites, but I don’t have that. I have a number of playlists on Spotify, including some designed to get me going on Monday Mornings and some intended to help keep me in flow state, but I didn’t have a list of songs I go back to again and again.

But, with some poking, I soon had it. In CSV form, because I didn’t immediately write my own. And, after a few queries, I decided re-parsing the CSV each time was too slow, and threw it into MySQL.

My thought, then, was to go all DataVis on it and run it through R. I mostly know R as a plotting library, handling data I pre-munge with DBs and other languages, and I have long wanted to “get good” on actually using it as a language.

I can get to top artists fairly easily, and break it down by year with a little bit more work.

With struggle and help remembered from the last time I tried to struggle with R, I got to

Which is nice enough. MySQL won’t let you have columns that are numeric, so I was thinking that eventually I would be able to use mapply or sapply to pull the initial y from the years column, but that should be sufficient to allow me to see my top artists.

But, each time I got to the point of ggplot(), it didn’t like it. I looped through each half-remembered plot I wrote in the past, trying to remember how I got it to work, and searching through StackOverflow and trying to get a sense of what R wanted of me.

Until I saw an example that used a data frame they threw together right before plotting. I tried it, looking at the generated frame before plotting, and I figured out the problem. This is what it desired:

It would group the artists without me. I just needed to get to this point, which, I confess, I broke down and implemented it with Perl, because I could, in the fullness of time, find the right query to get my all-time top-ten artists and their results by year in year,plays,artist format, but it was easier to take my existing query, munge the year, and spit out CSV.

And, from there, it was downright easy to actually plot the thing. 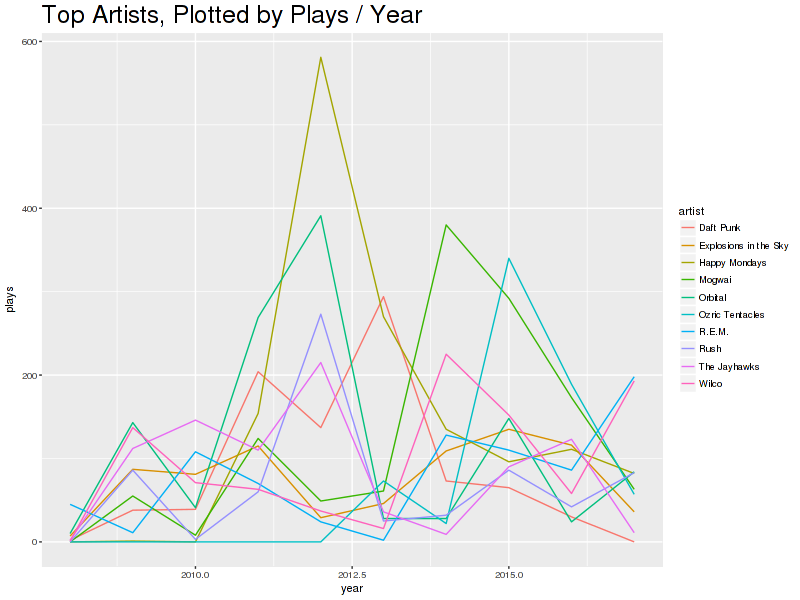 I am pretty sure that I left something repeating Explosions in the Sky overnight in 2012, which is why there’s that spike. Also, I should give Daft Punk some love this year.

While digging through this, it struck me that Programming is like Parenting an Infant. The keys are learning what input it wants, What he output should look like, and what do if either don’t look the way they should.

I suppose the next step is to start with the tracks and plays themselves, building them up a step at a time until I get to that CSV-like level. In fact, I should, if only as a learning experience.

And I think a count of the number of artists per year to whom I listened to one track or less would be interesting.